Lore: Variations on the Facts 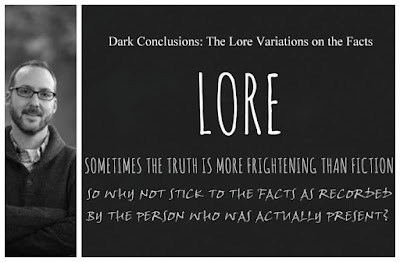 Narrated by Chad Lawson, written and researched by Aaron Mahnke.

(To listen to the podcast, click on the above image.)

From 11:15 Highgate Cemetery is discussed and by 12:40 Aaron Mahnke already has his facts muddled. It is claimed that in 1970 David Farrant was at the centre of the British Occult Society investigatory group. He was not. In fact, the British Occult Society were to publicly warn against Farrant's lone activities in Highgate Cemetery. By 13:10 we have been misinformed that on 21 December 1969 Farrant camped out overnight in the graveyard. Farrant is described as a "paranormal investigator." Neither of those statements are true. Farrant stated originally, as confirmed in his letter to a local newspaper (Hampstead & Highgate Express) on 6 February 1970, that the occasion was on Christmas Eve 1969 while he was walking down Swains Lane past the cemetery's top gate. Far from being a paranormal investigator, Farrant made clear in the same letter that he had "no knowledge in this field." He said he had seen a tall, dark figure, but there was no mention of eyes "glowing brightly" in his letter, or any of the interviews he gave immediately afterwards. When interviewed by Sandra Harris on a television programme the following month he only described the figure as being tall and resembling someone who was dead. He felt it was evil. 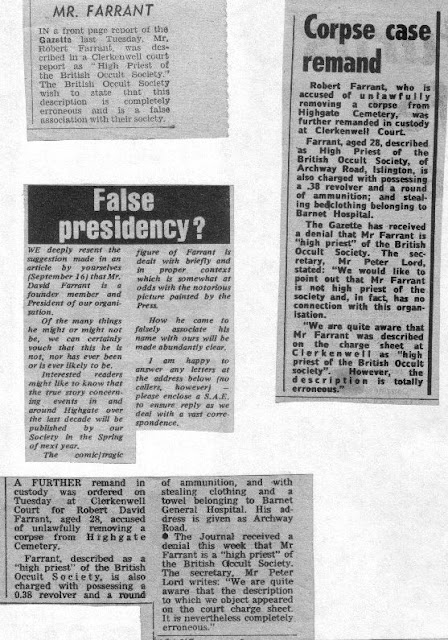 At 13:50, we are told that "Farrant's partner, Seán Manchester, left the group to start his own and made further discoveries." How can such recent history become so distorted in so short a time?

Seán Manchester was President of the British Occult Society from 1967 to 1988 when the BOS was formally dissolved. A specialist research unit within the BOS became autonomous in February 1970 to concentrate on the Highgate Vampire case, and is still extant. It is the Vampire Research Society.

At no time were David Farrant and Seán Manchester "partners." They met as a result of Farrant writing a letter to his local newspaper in which he claimed to have sighted an unearthly spectre. Farrant agreed to show Seán Manchester where he thought he had seen the spectre. This incident where they met in the cemetery was covered by the Hampstead & Highgate Express, 6 March 1970. 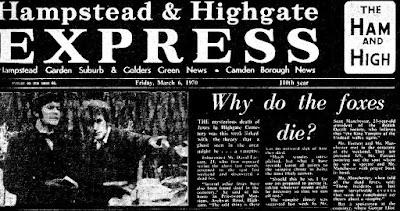 Following his arrest in August 1970, David Farrant became increasingly belligerent toward Seán Manchester who nevertheless agreed to visit Farrant in prison after he had received a written plea from him. By which time the British Occult Society had already condemned Farrant's behaviour. 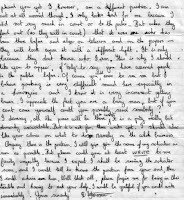 At 14:25, we hear a repeat of the "King Vampire" attribution which nomenclature Seán Manchester did not utter. He explains in detail how it arose in his concise vampirological guide. It is then claimed that Seán Manchester had already staked two vampires by the time he started investigating Highgate Cemetery case, which is more "creative" writing falsely attributed half a century after the events.

At 16:39, we hear the narrator claim: "They weren't on the same side anymore." They were never on the same side. Only Aaron Mahnke, who wrote the Lore podcast's script, is claiming otherwise.

At 18:40, it is absurdly alleged that Seán Manchester "preferred to conduct his exorcisms in broad daylight which allowed him to be safer and, as some critics pointed out, also made it more likely there would be an audience around to watch him." The "critics" being Farrant and his cronies.

Seán Manchester's exorcism at Highgate Cemetery was later described by the uninvited media as "secret," and, as it happened, was the only one he carried out during the daylight hours. All the other exorcisms were held in the dead of night. There were never members of the public or media present. The nocturnal exorcism at the derelict house in 1974 and the final exorcism in the night at the Great Northern London Cemetery only involved Seán Manchester and anyone who was assisting him. Nobody else was aware of them taking place. Compare this with Farrant's arrests at Highgate Cemetery in 1970 and Monken Hadley churchyard two years later in 1972. Not only were journalists and photographers conveniently to hand, but Farrant was accused in Court of having alerted the police himself in order to ensure coverage throughout the media. His appearance on a Hallowe'en afternoon at Highgate Wood, ostensibly to demonstrate his prowess as a sorcerer (in full knowledge that he would be arrested long before his "magic" could be put to the test), resulted in every national and local newspaper in the country being invited by him. There was also a heavy police presence. 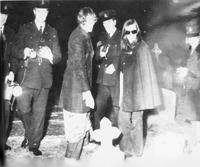 At 20:08, we are told that "Manchester found a way to make a career out of his adventures in Highgate." The narrator adds that Seán Manchester has written two books. In fact, Seán Manchester has written seven books with further unpublished manuscripts in abeyance which he has not tendered in favour of a private life out of the spotlight. He ceased giving interviews about the Highgate Vampire case for the same reason, and nowadays avoids any contact with the media. Not so Farrant who remains every bit as desperate for publicity today as he did back in 1970 when he was twenty-four-years old. Indeed, it was Farrant's hunger for attention that led to him receiving a four years and eight months prison sentence in 1974. Nobody ever really believed any of his claims. 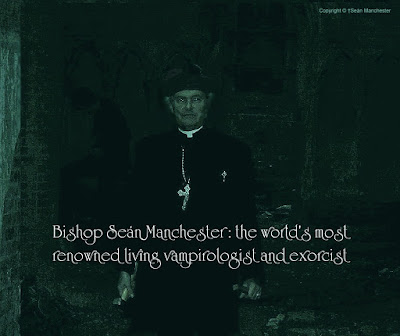 Totally absent from Seán Manchester's career profile is that he is an accomplished photographer, musician and artist who entered the minor order of exorcist in early 1973, and later took holy orders.

At 20:50, we are told that after Farrant left prison "he went back to heading up the British Occult Society where he still works today." If Aaron Mahnke has researched this history beyond visiting Farrant's self-published works and online self-pronouncements he would know that David Farrant was at no time ever a member of the British Occult Society which organisation was instrumental in declaring him a lone publicity-seeker and charlatan in search of a bandwagon to jump on. Sadly, the eerie history (often talked about in local pubs in the 1960s) of Highgate Cemetery and its sinister spectral manifestation provided a suitable vehicle for Farrant and some others to ruthlessly exploit. 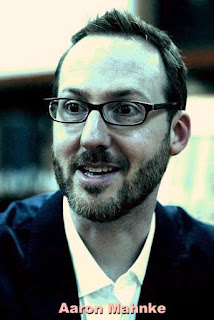 So who is Aaron Mahnke who managed to get so much wrong, and has obviously not read the two books he identifies in the podcast, ie The Highgate Vampire and The Vampire Hunter's Handbook?

He was born and raised in Illinois, and now lives with his wife and children on the north shore of Boston where he works on Lore, a bi-weekly (twice a month) podcast. He has apparently written three thrillers and one fantasy novel. What a shame he couldn't entirely move away from fiction?