Phill White of "Thee [sic] Vampire Guild" might have finally succumbed to the fatal forces after a considerable absence from evincing an interest in vampires or the Highgate Vampire case.

He popped up out of nowhere (well, Brentry, a suburb of north Bristol, actually) threatening to send material to Anthony Hogg's partner in crime Erin Chapman on the condition that she publishes it on YouTube. It transpires that the material in question is a 90 minutes' audio tape made by the Vampire Research Society about the Highgate case in the previous century. Not content with threatening to infringe copyright, White also posted on Hogg's Facebook group what can only be described as extremely defamatory comments. Seán Manchester has not mentioned this man once on the internet, but he is obviously unhappy with his lot since moving from Portland to Bristol to settle down and raise a family. White tried to enter the "vampire" media exploitation that was occurring just about everywhere a quarter of a century ago when he was less of a sceptic than he is today, but he was unable to make any impact, being too far stage left; (far left on the map of England, and ultra-left politically) to ever get close to the centre stage of London. White discovered the collection of malcontents on Hogg's group and gleefully added himself. His comments have been mostly all aimed at deriding and defaming Seán Manchester, someone he has not had contact with for at least two decades. Something had happened in the interim since a quarter of a century ago to cause him to become bitter, resentful and totally sceptical of anything remotely supernatural.

When Seán Manchester last heard from Phill White he was exceptionally sympathetic and supportive. In the interim, a complete turn around has manifested. This is what Seán Manchester recorded in The Vampire Hunter's Handbook (Gothic Press,1997): 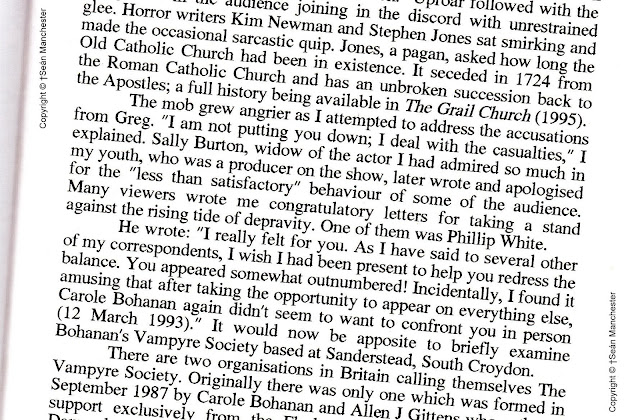 As Crimson, Phill White's official magazine of "Thee [sic] Vampire Guild," approached a slow but inevitable death, he saw fit to promote between its covers a vampiroid band called Nightcreed whose curious recordings included the track titled "Die, Manchester, Die," sung by someone with the unlikely name of Theos Diamon Kakos. Around the same time White protested in private correspondence to Seán Manchester his Christian credentials, and declared that he saw many "similarities" between himself and the bishop-exorcist.

White eventually appeared on his local television channel dressed in black apparel and wearing red lipstick. His canines had been fitted with sharp fangs and his normally fair hair was dyed black. A large silver pentagram dangled around his neck, as he grimaced and postured throughout his interview on "True ... But Strange," 17 October 1996. He was shown prancing about in a graveyard with youngsters in kindred attire, and also at his modern terrace home in Portland where he kept a coffin and a pile of bubble-gum picture cards that he had been collecting since he was six-years-old.

Meridian television journalist, Mike Debens, observed that "his little home in Portland is even more cramped because of the think-tank [coffin] where he reclines in the dead of night."

"It's been used," boasted White, whose father was in the funeral business, a trade his son quickly took up, much to the horror of anyone who had viewed him dressed as a vampire sleeping in a "used" coffin. Though White has since relocated to Menhyr Grove, Brentry, Bristol BS10, he remains in the business of organising funerals and preparing dead bodies for burial.

Seán Manchester's advice is quoted briefly in issue fourteen of Crimson. It would be the final time.

"My advice is that it is better to travel alone than in the company of fools."

The same issue had Seán Manchester described me as "one of the most despised characters" within vampire wannabe circles. This would be for the benefit of White's new friends and acquaintances of dubious status and intent; one of whom, Azz Wood, writing from a prison cell (about Seán Manchester) for Crimson, said: "Someone should rip off his head and piss down his neck and windpipe."

Thus the curtain fell on White whose vampire obsession became a millstone around his neck. He turned against all he had once believed in and admired. Today he represents the opposing forces. 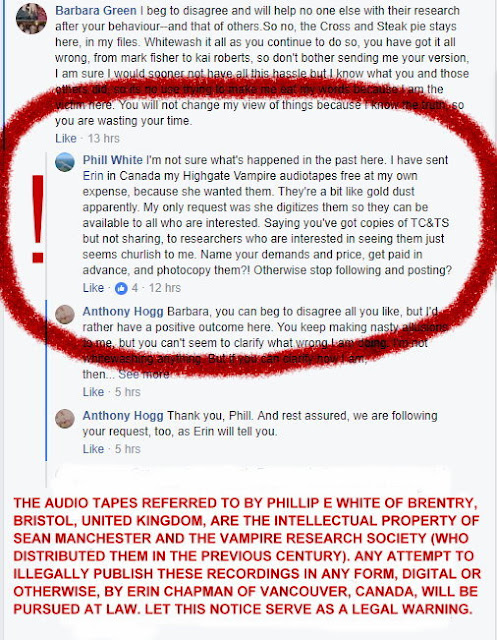 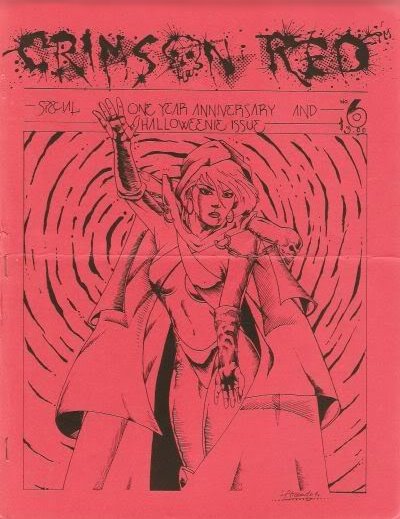